This is what DC Rainmaker thinks of the Super GPS

In recent years, Lezyne has undergone a true transformation. We are familiar with the bicycle lighting brand, but Lezyne is increasingly specializing in GPS bicycle computers. I think this is a development that does not receive enough attention.

In recent years I have had a Lezyne GPS in my hands. As far as I am concerned, the latest Lezyne GPS models are increasingly close to the 'mainstream' GPS that we all know and love to use. The pricing, for example, is favorable: the GPS's start around € 100 and the most expensive is around € 200. Very affordable, whichever model you choose.

During the Eurobike I got the chance to have a drink at the Lezy stand. Lezyne then gave me the new Super GPS to test. Below I will discuss the most important functionalities of this cycling computer and explain a few unique features that you will not actually find on other GPS cycling computers. One specific function, which has to do with connecting your smartphone, has certainly caught my attention. Read on soon.

The unique thing about the Super GPS

- has a barometric altimeter
- gives a display / indication of the temperature
- uses GLONASS for additional GPS data.
- can be connected to all kinds of sports gadgets via Bluetooth smart and ANT +.
- can therefore be used with heart rate sensors, cadence sensors and speed / power meters.
- can connect to all kinds of electronic (sports) gadgets.
- supports Strave Live Segments (real-time feedback)
- shows smartphone notifications (SMS / calls / e-mail)
- can send live tracking updates to friends / family via email
- has a breadcrumb path so you can see your route afterwards.
- can display five personalized screens, each with 4 data screens shown.
- shows the battery level of the GPS and all paired gadgets.

Lots of great features to list, I just want to dwell on two of them. First, the Lezyne Super GPS has a Strava Live Segments function, with which you can quickly load your favorite segments on the GPS. This is quite unique, compared to the GPS bike computers from, for example, Wahoo or Garmin.

The unique thing is that you can (actually) see on the Lezyne Super GPS which segments of your smartphone app are being loaded. On other GPS devices you can often only access the favorites from the Strava backend or you only see a static display on the screen. Also nice: on the Lezyne Super GPS you can even configure the pop-up notifications of the Strava segments, so you determine how quickly you receive the Strava pop-ups. 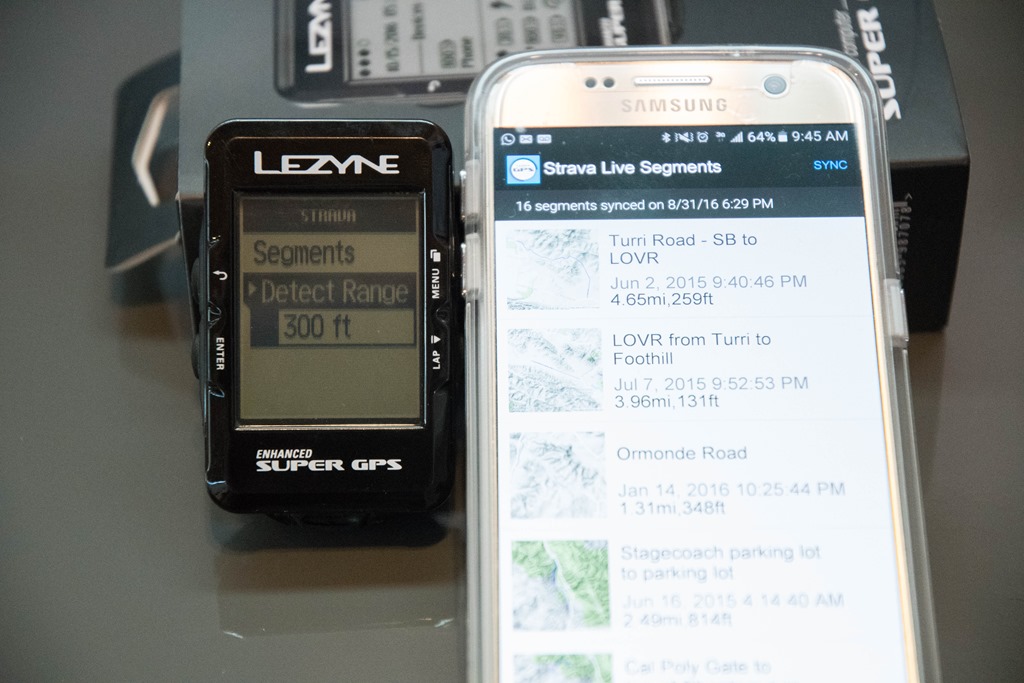 What I've seen from the Lezyne Super GPS is good. It seems that Lezyne has laid a good foundation with their Super GPS - although I don't find the cycling computer as detailed as the GPS devices from, for example, Garim or Wahoo. Still, the Lezyne Super GPS will probably do just fine for most cycling enthusiasts. And the fact that the Lezyne Super GPS Strava directly synchronizes data and is also easy to connect to your smartphone should not be forgotten.

The Lezyne Super GPS also has a smartphone function that stands out and that I think is really cool. You can navigate via your smartphone and display this on the Super GPS. The Super GPS automatically shows the navigation step by step on the display. Any avid cyclist knows that a ride requires considerable planning. Scheduling a ride can be quite cumbersome. You have to plan the route in advance and sync it with your GPS device (Wahoo / Garmin), or you have to enter the route manually on a tiny GPS screen (Garmin). The Lezyne Super GPS saves you this effort. You start the navigation on your smartphone and only need to enter the address or the desired location to navigate via your GPS device. The route is automatically calculated as a cycling route and synchronized with the GPS cycling computer. This is stored on the GPS device. This way, the navigation is retained, even if the range of your smartphone is lost.

Why this is such a great feature? Because you can activate or change it at any time, even during a ride. It does not affect the registration of your ride and it works - once again - a million times easier than entering an address on such a miracle screen. Countless times I left with my Garmin GPS, only to navigate with my smartphone, because I changed my mind and route ... On the GPS bike computers that we know, it was impossible to change your route while riding , so with the Lezyne Super GPS. The feature is just really cool and it's the coolest feature I've seen on the Eurobike anyway. 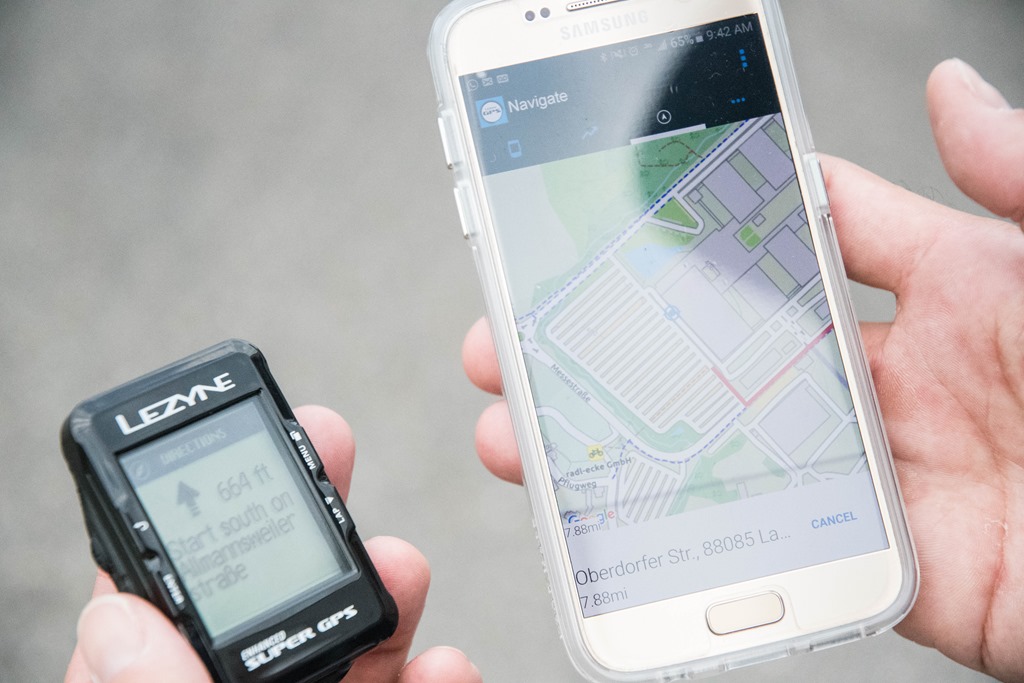 You may already understand why I think the Lezyne Super GPS will mainly appeal to commuters. Entering (new) destinations is just super simple and genuinely easy. Speaking of commuting; the Lezyne Super GPS shows the lifespan of your smartphone battery on the display of the cycling computer. Ideal if you store your smartphone in your bag or jacket pocket while cycling.

Another truly innovative feature is the integration of a battery-saving accelerometer in the GPS bike computer. As soon as the so-called 'accelerometer' registers that you are standing still (for example, for an ice cream or the traffic light), the GPS automatically goes into sleep mode. This means that the battery of the Lezyne Super GPS has an impressive battery life of up to 24+ hours. I am surprised that such a logical and intuitive function has not been incorporated in all GPS devices for a long time, because it is a great added value. The function offers many advantages for commuters and ice cream enthusiasts, or for anyone who makes frequent stops and breaks. Battery savings can add up in a week. 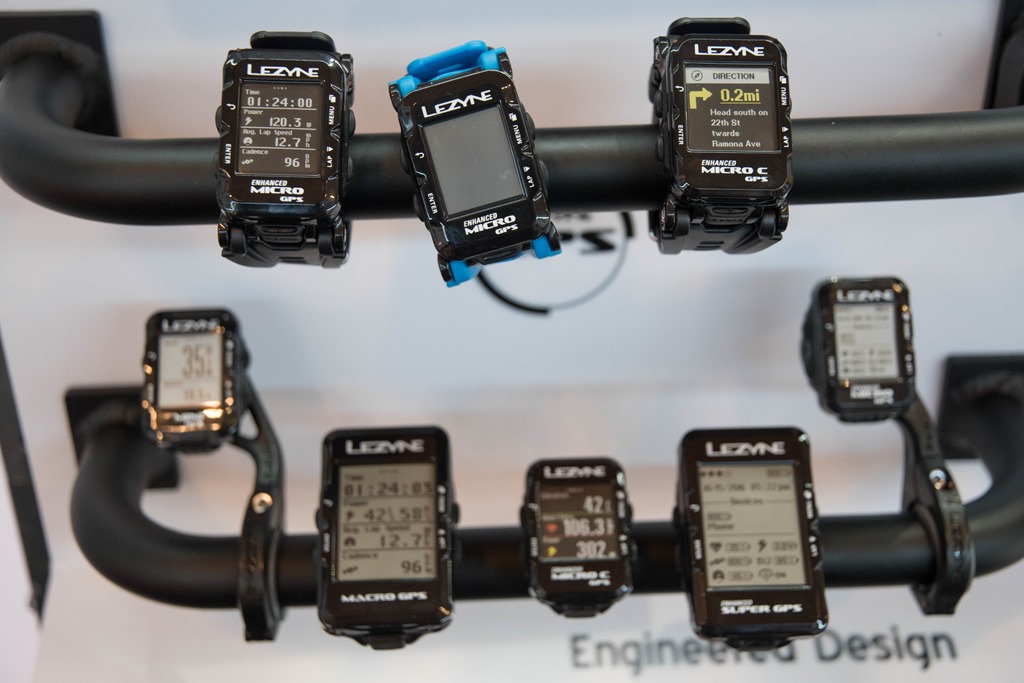 Tonight I tried to pick a donut from the Tim Hortons at the airport. Of course I couldn't choose, so I decided to take two (I'm mastering one at the moment). I could have brought seven different donuts for myself, but of course I didn't. That would be very greedy. And then I would be very much like Homer Simpson.

Lezyne doesn't have much of a problem with multiple flavors or variants. They released seven GPS models without blushing. These seven different GPS cycling computers only seem to have to compete with the GPS Watch Confusion , which Garmin launched.

Phew. Still unclear? Okay, admittedly, this overview doesn't help you much either. What you want to know is as follows.

Is it like that? Still not? Excuse. In these tables it is all listed:
Review continues below the image.

And the pricing of the Lezyne GPSjes? As I said before, the Lezyne GPS cycling computers are relatively inexpensive compared to Garmin or Wahoo. Polar is getting closer with the M450. The prices are a bit close to brands like Cateye. Lezyne's prices are as follows:

All the above products are currently shipped around the world and can already be ordered in many places. Oh yes, I already mentioned the GPS watch, with which you can also run. Lezyne has basically upgraded two of their GPS models and added some running modes, making the GPS watch the GPS watch.

The only challenge is the watch's size. It is still quite large now and it sits quite high on your wrist. I do not expect this product to be immediately successful. 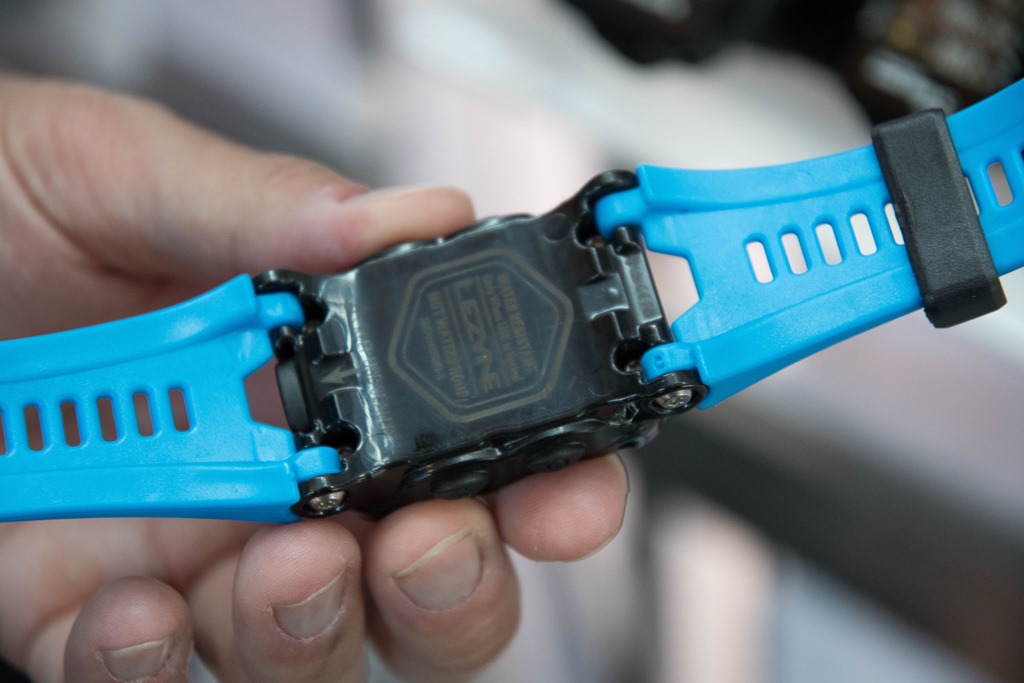 The future of Lezyne GPS

As you can see by now, Lezyne has made quite a few cool software updates. The Strava Live Segments, the step-by-step navigation and in particular that smooth and easy connection with your smartphone are very competitive features. This also applies to the battery life, which, thanks to the smart accelerometer, minimizes battery consumption at rest or stopovers.

Still, there is one problem that Lezyne has and that everyone notices: the product is ugly.

Recently, an Instagram friend of mine became a father. The couple noted that their child has a face that "only a mother can love." (seriously, I'm not kidding - it's their own words, not mine). Anyway, that's pretty much the core of what Lezyne's GPS bike computers are struggling with. The outside is just not that nice. The product has a fantastic soul, but is simply a bit clumsy and clumsy in terms of housing. I personally wouldn't care much for my commuter / work bike. But for a sleek, beautiful racing bike? No rather not. By the way, Lezyne offers GPS handlebar mounts like Barfly's.

My impression is that Lezyne currently focuses mainly on commuters with the GPS bike computers, at least with the Super GPS. It is an ideal GPS for a drive across the city and it offers you everything you need there. The Super GPS is also a great option in all other circumstances, as long as the looks of the GPS are not important. I especially think that Lezyne has succeeded well in optimizing the software. Every bicycle computer manufacturer can agree that optimization is the most difficult and time-consuming process there is.

That said - thanks for reading! 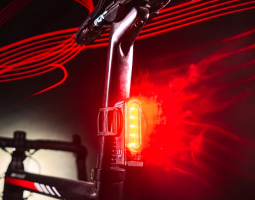 Recently, a number of Lezyne lamps have been equipped with an Alert function. But what does this function entail? In this blog we explain what... 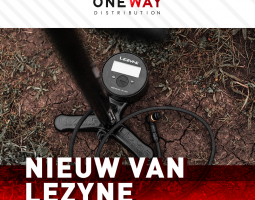 New products from Lezyne! In this blog you will find information about the new products; what makes them so special?